The interstellar medium is a turbulent and compressible system (von Weizsacker 1951), in which cooling and heating determine the physical state of the gas. Interstellar cooling can be the result of line and continuum plasma emission processes, as well as of adiabatic expansion of over-pressured gas. The importance of the former depends on the amount of atoms and ions present in the flow, whereas the latter is related to thermodynamical processes. For optically thin interstellar plasmas, frequently the assumption of collisional ionization equilibrium (CIE) is used, according to which the collisional excitation of the gas is followed by photon emission, with the number of ionizations being equal to the number of (dielectronic or radiative) recombinations. However, this violates detailed balancing, since collisional excitation involves three particles, an atom or ion, an electron to collide with, and a second electron which is ejected, whereas in radiative recombination, the third particle is a photon, leaving the system.

Strictly speaking, CIE can never be maintained in an evolving plasma, although it might be a fair approximation, especially in hot (T>10^6 K) environments. For lower temperatures recombinations are not synchronized with the cooling and therefore, deviations from CIE inevitably occur.

We developed the Collisional + Photo Ionization Plasma Emission Software (CPIPES) to trace in a time-dependent fashion the thermal state of a plasma (composed by the ten most abundant elements in nature – H, He, C, N, O, Ne, Mg, Si, S, and Fe) during the MHD evolution of the intersttellar medium and determine on the spot the cooling and emission spectra. For details see Avillez (2018) and Avillez et al. 2018.

The evolution of a cooling gas parcel

The evolution of the ionization structure and cooling of cooling gas parcel, with no dynamics included) is studied under three conditions:

As examples of the ionization structure variation with temperature for a plasma evolving under NEI isochoric (black lines) and isobaric (red lines) conditions we show the ion fractions of Ne, Mg and Si. 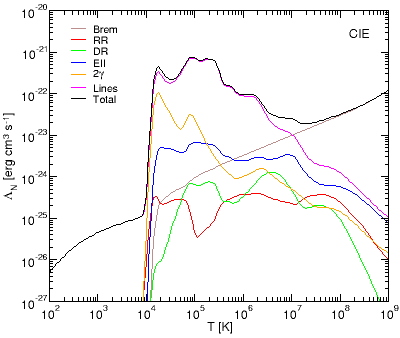 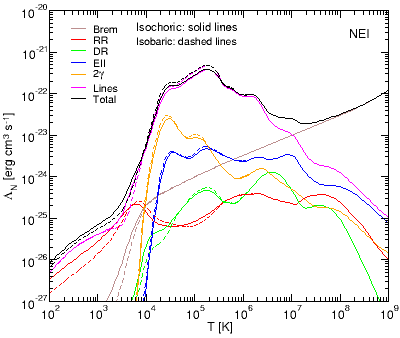